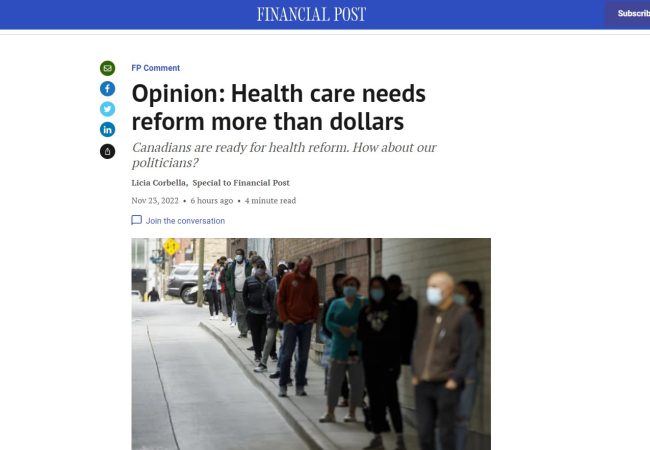 Mention medical wait times to just about any Canadian and more than likely they’ll have a story to tell — if not their own then one (or more) from family or friends. Chances are, they’ll also agree that Canada needs health care reform.

My long-time friend Beth waited more than two years for an operation to her left hip. The last year, she admits, was “excruciating.” She had to walk with a cane, couldn’t golf, had trouble getting dressed, couldn’t travel, couldn’t play with or take care of her younger grandkids and basically had a very poor quality of life. “We’ve paid into the health care system our entire lives,” says the 79-year-old Calgary grandmother and when I needed help the system wasn’t there for me.”

Beth was so tired of living in near-constant agony she looked into flying to Toronto, where her son, daughter-in-law and three of her grandkids live, to pay to have her hip replaced at a private clinic, Clearpoint Health Network in the Toronto suburb of Don Mills. The price was $28,000 not including the cost of her flight and accommodations. “I couldn’t stand the pain anymore,” she explained, “even though I didn’t want to be away from home to get care and I didn’t want to spend that kind of money I was desperate.”

The irony is that Clearpoint has a clinic in Calgary but the government won’t allow her to spend her own money in her own province on private health care that would alleviate her pain. Coincidentally, Beth has a friend from Ontario who flew to Calgary to pay to have his hip replaced in Alberta because he too is not allowed to spend his own money on his own health in his own province. It’s absurd.

A variety of laws in Canada prevents patients from using their own funds for medically necessary health care in their respective provinces. The loophole is that you can use your own money to pay for health care in other provinces. All of this inconveniences and even harms patients greatly.

In true Canadian fashion, Quebec is an exception, thanks mostly to a 2005 Supreme Court ruling, Chaoulli v. Quebec, which found the government can’t ban private health care while rationing public care to patients. As then-Chief Justice Beverley McLachlin wrote: “Access to a waiting list is not access to health care” — which you think would be true outside Quebec, too.

My friend Beth is just one of 2.9 million Canadians who languished on a health care wait list according to Freedom of Information responses from provincial governments and territories released to think tank SecondStreet.org. Since some provinces didn’t respond with complete data, SecondStreet.org conservatively estimates that at least 3.7 million — or one in every 10 Canadians — is on a health care waiting list.

Sadly, some patients are even dying while waiting to receive a diagnostic scan or meet with a specialist, never mind getting to the point where they’ve been put on a surgical wait list. According to data also collected by SecondStreet.org, between April 2018 and December 2021 a total of 26,875 patients died while waiting for surgery or other health procedures. Details on these deaths are incomplete but the majority appear to be cases where a patient died waiting for care that could have improved their life (e.g., hip surgery) rather than saved it (e.g., heart surgery). There certainly are cases, though, of critical interventions delayed too long. Beth and I have a friend, Wayne, who passed away from colon cancer while he waited for a colonoscopy.

The good news is that just as Beth prepared to buy airline tickets to Toronto to get her hip replacement out of province, a call came through and she ended up having it done in the public system in Calgary — following a 26-month wait. She’s delighted with the outcome and while she’s still using a cane for stability, she anticipates being able to get rid of her cane in the next couple of months.

According to the Fraser Institute, waiting times between referral from a general practitioner and treatment have steadily increased since 1993, when it began tracking them. They currently stand at about 26 weeks or half a year. COVID made wait times even longer but they have been growing for decades.

In October, SecondStreet.org hired public opinion polling firm Leger to ask Canadians about health care reform. It found that the majority of respondents — almost two-thirds of Canadians — support copying a European Union policy that gives patients the right to reimbursement from their governments for planned surgeries they have to get out of province. A majority also support governments hiring private clinics to provide surgeries for patients in the public system — where the patient would not have to pay out of pocket.

Canadians are ready for health reform. How about our politicians?

Licia Corbella, former editorial page editor at the Calgary Herald, is a contributor with SecondStreet.org.

This column was published in The Financial Post on November 23, 2022.