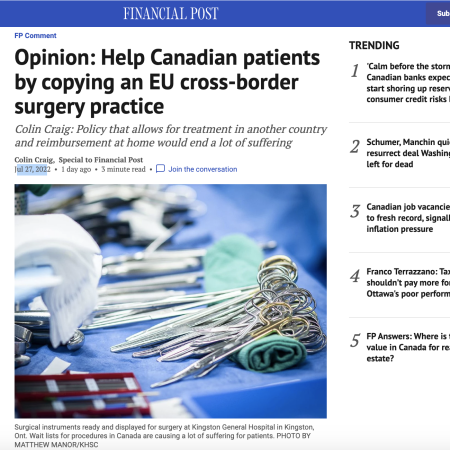 If provincial governments copied a health care policy from Europe, they could immediately help thousands of Canadian patients who are suffering.

Passed in 2011, the European Union’s (EU) “cross border directive” takes power out of health bureaucrats’ hands and instead puts patients in the driver’s seat. EU patients facing a long wait list for a procedure can travel to another EU country, pay for surgery and then be reimbursed by their home country for the bill. Reimbursements cover up to the cost of what the government would have paid to have the procedure done locally.

Importing the EU’s policy approach to Canada could bring immediate pain relief for many desperate patients. A couple of years ago, B.C. patient Jenny Mckenzie described to SecondStreet.org what life was like on a waiting list. Her hip pain was so severe that just walking across her living room became quite difficult. The government’s slow health care system also robbed Jenny of precious time with her grandkids: babysitting hyper-mobile kids was simply out of the question. While she waited for surgery she couldn’t travel, exercise or even meet her friends for coffee.

Other patients have described having suicidal thoughts as they languished on government waiting lists and struggled to cope with chronic pain. A retired nursing professor who conducted academic research into patient suffering once described to SecondStreet.org how an Alberta patient had his surgery cancelled, as his year-long wait for the procedure required taking painkillers and the narcotics had damaged his liver to such an extent he no longer qualified for surgery.

If provincial governments provided financial support for Canadians to receive surgery abroad or in other provinces, thousands of patients could receive the care they need in a timely manner. Grandparents could get back to enjoying their retirement years and spending time with their grandkids. Parents could return to work and get their lives back on track. Who knows? Some patients’ lives might even be saved.

To be clear, there could be cases where a patient has to pay the difference between the amount their government reimbursed and the cost of surgery by a health provider outside of Canada. However, the reverse is also possible. For instance, Manitoba patient Max Johnson indicated in late 2021 that his knee surgery in Lithuania cost far less than the Manitoba government typically spent on the procedure.

Copying the EU’s approach would also help patients who didn’t travel abroad but remained on government waiting lists for surgery. Every time someone ahead of them in line left the public system’s waiting list and traveled abroad, everyone on the list would move up a spot.

Provincial governments do sometimes cover the cost of planned surgery provided to Canadian patients in other countries. But the key word is “sometimes.” While this recourse is rare in Canada, in the EU in 2019 84 per cent of applications for reimbursement were approved. Overall, 243,655 patients either had their reimbursement request approved up front or after the patient paid for surgery. Canadian patients would clearly benefit if Canada also routinely approved reimbursements.

Perhaps the best aspect of this policy is its cost, which is minimal. It doesn’t really increase costs but instead shifts when the expense occurs. Instead of the government paying for a patient’s surgery next year, it pays the bill now. Thus, over time the cost balances out.

Travelling abroad for surgery is not exactly convenient; nor is having to front money for surgery. But Canada’s system is in crisis. Too many patients are suffering. We need to think outside business as usual. Governments have grown far too comfortable with long health-care waiting lists. Patients deserve a new approach, one that puts them in the driver’s seat.

Colin Craig is president of SecondStreet.org, a Canadian think-tank.

This column was published by the Financial Post on July 27, 2022.