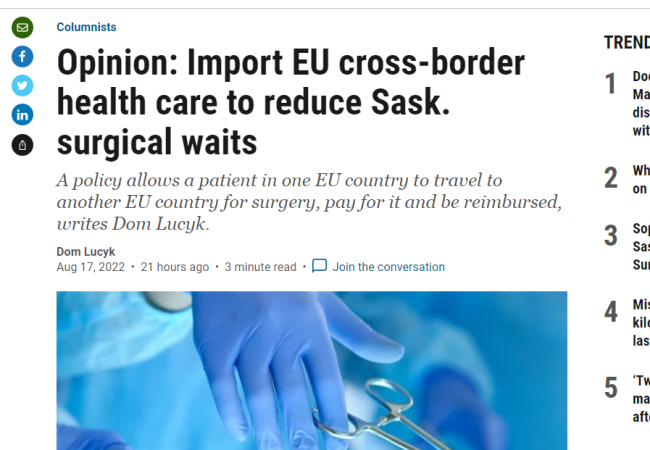 Imagine living with cloudy vision, not being able to see at night and being blinded by bright lights. Those are common symptoms for people struggling with cataracts.

While wait times for cataract surgery and many other surgeries in Saskatchewan are currently quite long, there’s a policy solution from Europe that could help patients receive the surgery they need much faster.

As of April, there were approximately 4,500 people in our province waiting to receive cataract surgery alone. If you add in all other surgeries, the total number of patients waiting for surgery rises to more than 35,000  — that’s more than the capacity of Mosaic Stadium. It’s not just Saskatchewan; across Canada, governments postponed thousands of surgeries during the pandemic, making our nation’s waiting list crisis even worse.

Patients in the European Union, however, have more options when confronted with long waiting lists, including something called the “cross border directive.”

This European Union policy allows a patient in one EU country to travel to another EU country for surgery, pay for it and then be reimbursed by their home country. Reimbursements cover up to the amount the home country would have spent for the procedure locally.

It’s easy to see how this could have an immediate positive impact for Saskatchewan patients.

Patients facing long waits for cataract surgery could travel just over the border to the United States and receive surgery quickly instead of having to wait half a year, a year, or more. For instance, the Dakota Eye Institute in North Dakota informed SecondStreet.org that its waiting list is usually only two weeks or so. Bill Marion, the manager of the company, noted they would be happy to have a bus load of patients come from Canada for surgery.

One shouldn’t chuckle at the idea of a busload full of Saskatchewan patients heading abroad for timely surgery. Beginning in 2017, two politicians from Ireland regularly organized busloads of patients to travel to the UK for cataract surgery. As of 2019, they had helped around 1,500 patients receive faster cataract surgery  — and reimbursement from the Irish government.

Of course, the Saskatchewan government could allow reimbursements for more than just cataract surgeries abroad. One Manitoba patient calculated that his successful knee surgery in Lithuania actually cost far less than what the government would have spent at a public hospital in Winnipeg.

Needless to say, there are cases where surgery abroad may cost patients more than what the government reimburses. Thus, it’s up to patients to decide if they want to pay the difference or wait for the government to provide surgery. Like it is in Europe, this policy would be completely voluntary.

In fact, it would even help those who remain on government waiting lists in Saskatchewan. Every time a patient travels abroad for surgery, they leave the waitlist and everyone behind them moves up a spot.

It’s important to note that government expenses for this policy would be minimal over the medium term. Instead of paying, say, $7,000 for John Doe to receive cataract surgery in Saskatchewan next year, the government would spend $7,000 to reimburse John Doe for his surgery abroad this year. Not only does John’s life improve sooner, reducing patient wait times can often save the patient from other health complications — and save the government from paying for them.

The Moe government has set a goal of reducing waitlists back to pre-pandemic levels by 2025. Importing this policy from the EU would allow for a significant step toward that goal.

This policy is a win-win. It’s essentially cost neutral to the government, would reduce the stress on the health-care system and, most importantly, it would let people get the care they need more quickly.

Dom Lucyk is the communications director with SecondStreet.org, a public policy think tank.

This column was published by the Saskatoon Star Phoenix and the Regina Leader-Post on August 17, 2022.