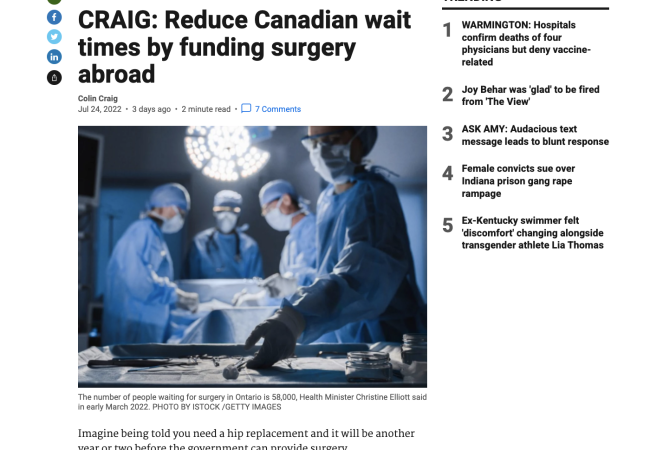 Imagine being told you need a hip replacement and it will be another year or two before the government can provide surgery.

In the meantime, you’re living with chronic pain and your life has gone from being extremely active – working, travelling, exercising, visiting with friends regularly, etc. – to largely being stuck in your apartment. Even walking across your living room is a painful ordeal. You can’t cuddle your kids or grandkids because they climb all over you.

This is what Jenny Mckenzie, a patient from Vancouver, described to us in late 2018 as she waited for hip surgery. Due to governments postponing thousands of surgeries because of the pandemic, waiting lists across Canada have never been worse.

There are countless Jenny Mckenzies in Canada right now. Some have even developed depression, had suicidal thoughts … patients have even died from not receiving treatment in time.

Far too often this is how patients spend their final years – stuck on waiting lists, living in misery. It’s sad and this is unbecoming of a nation like ours.

Fortunately, there’s a policy in Europe that could be implemented relatively easily and it could help governments reduce waiting lists immediately. Within weeks, patients could ease their pain.

A little over a decade ago, the European Union (EU) passed what is known as the “cross border directive.” The policy allows EU patients to travel to other EU countries, pay for surgery at a public or private health facility and then be reimbursed by their home country. Reimbursements are provided for up to what their home country would have spent to provide the surgery locally. If the cost of surgery is higher than what the patient’s home country provides, the patient pays the difference.

SecondStreet.org decided to investigate this policy after a Manitoba patient named Max Johnson mentioned it in a media interview about his trip to Lithuania for knee replacement surgery. Johnson made the trip to Europe after facing a wait time of upwards of two years in Manitoba.

When it was all said and done, he calculated that the cost of his knee surgery in Lithuania was substantially less than what the Manitoba government would have spent to provide the surgery in Winnipeg.

Fortunately, it worked out for Max, but not everyone can afford to do the same. Canadians pay a fortune in taxes each year, in large part to fund the health care system, but many don’t have enough left over to pay for surgery abroad.

If Canada copied Europe’s lead, patients would have all kinds of new health care options at their fingertips. Canadians could duck across the border to the U.S. Others could schedule surgery in Europe while visiting family. The possibilities are endless.

This option would even benefit patients who decide not to travel for surgery and remain on waiting lists in Canada. Don’t forget, each time someone ahead of them in line decided to leave the public waiting list and travel abroad for surgery, everyone else would move up a spot in line.

Again, our system is in crisis. This policy could bring relief for thousands of patients. Isn’t that the point of the health care system?

Colin Craig is the President of SecondStreet.org, a Canadian think tank. You can reach him at colin@secondstreet.org.

This column was published by the Toronto Sun, Ottawa Sun, Edmonton Sun, Calgary Sun and Winnipeg Sun on July 24, 2022.