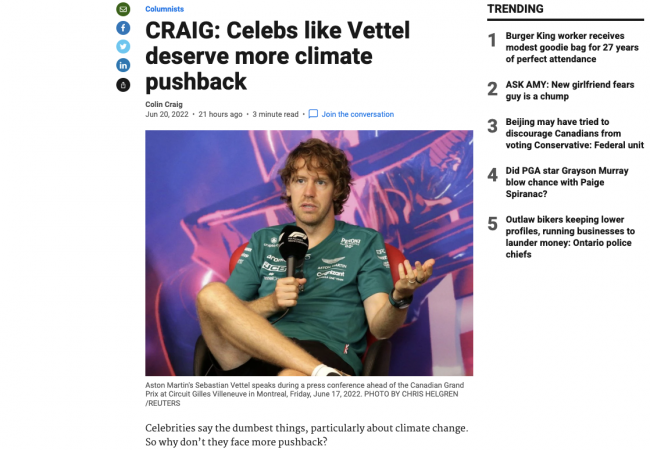 So why don’t they face more pushback?

The most recent example of climate ignorance, hypocrisy, whatever you want to call it comes from Sebastian Vettel, a German F1 driver (backed by billionaire Montreal businessman Lawrence Stroll) who recently came to Montreal for an F1 race. Vettel caused a stir when he showed up wearing a “Stop Mining Tar Sands … Canada’s Climate Crime” t-shirt – a reference to Alberta’s oil sands.

But hold on just a moment.

Then there’s Vettel’s profession – he drives a gas guzzling race car for a living. His whole life is built around burning oil and gas for fun.

According to Formula 1, the sport contributes 256,000 tonnes of CO2 each racing season. F1 has committed to become “net zero” but so have Canadian oil sands companies. In fact, emissions per barrel from Alberta’s oil sands are already down 20 per cent over the past decade. So, why does Vettel think it’s ok for his employer to work towards reducing emissions, but other companies shouldn’t have that same opportunity?

If you plug in this year’s Formula 1 racing schedule into carbonfootprint.com, you’ll find Vettel’s work flights alone are about 69 tons of CO2. For perspective, that’s about 17 times what Statistics Canada calculated the average Canadian emitted in 2018.

Finally, his race team is sponsored by Saudi Aramco – Saudi Arabia’s state-owned oil company. Yes, in Vettel’s head Saudi oil is somehow ok, yet Canadian oil is a “crime.” Let’s not forget, Saudi Arabia only recently allowed women to drive. It’s also the same country where homosexuality can be punished by death. Gulf News reported in 2014 that a Saudi man was sentenced to 450 lashes for trying to use Twitter to meet up with another man. The country even seizes products with rainbows on them. If Vettel wants to make a statement, he should tear up his Saudi Aramco sponsorship and wear his rainbow shirt during his next race in Saudi Arabia.

But Vettel is hardly alone in making ignorant comments.

Actor Mark Ruffalo, best known for his role as the Incredible Hulk, recently made headlines for opposing a natural gas pipeline project in B.C. The pipeline is supported by all 20 aboriginal communities along its route and while Ruffalo and others criticized it for environmental reasons, it is actually a positive development for the planet. Once completed, the Coastal GasLink Pipeline will transport natural gas to global markets, helping to replace coal power (which has much higher emissions).

Actor Leonardo DiCaprio is another frequent offender. The UN climate change ambassador has criticized Canada’s oil and gas sector multiple times, yet he’s often seen partying on enormous gas guzzling super yachts. On one occasion he reportedly even flew with a private jet from France to the United States to pick-up a climate change award.

Canadians should know our country is a leader when it comes to environmental protection and human rights. Writing for the Financial Post, Eric Nuttall recently noted:

“In recent months, while expanding the Trans Mountain Pipeline, Canadian taxpayers funded the moving of 100 ant hills, 150,000 frogs and other amphibians, and even “rare moss” out of harm’s way.”

Our nation is not perfect, but we’re more ethical and conscientious than most. That’s more than what can be said about foolish celebrities and the emissions they spew.

This column was published in Sun newspapers (Toronto, Ottawa, Winnipeg, Calgary and Edmonton) on June 21, 2022.