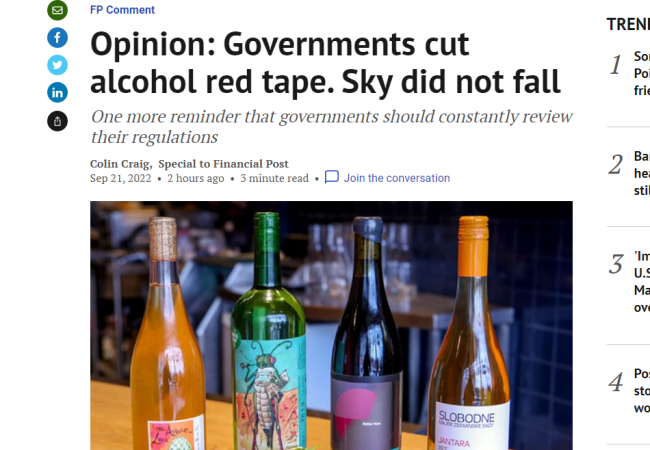 For decades Canada’s restaurant industry had asked provincial governments for permission to sell alcohol with their takeout and delivery orders. And for decades the answer was always the same: “No!”

It took a global pandemic for provincial governments across Canada to finally agree to change the rules. And what happened? Did the sky fall? Hardly. New research by SecondStreet.org shows the new rules caused very few problems nation-wide, which is yet one more reminder that governments should constantly review their regulations and modernize or eliminate unnecessary rules.

As a bit of background, Restaurants Canada, an industry association with 30,000 food service members across the country, told SecondStreet.org governments typically argued there were three reasons restaurants couldn’t sell alcohol with takeout and delivery orders: it would encourage overconsumption of alcohol; minors would find it easier to get access; and it would reduce the sales of stores that sold alcohol — including government-run liquor stores.

After the pandemic hit, governments imposed severe restrictions on restaurants nation-wide — from forcing them to shut down their dine-in operations in the early days of COVID to restricting dine-in capacity once it was allowed again. Permitting restaurants to sell alcohol with takeout and delivery orders was one small way governments could help them earn a bit more money as many struggled to stay in business.

The change was met with praise in Canada’s restaurant industry. Tony Siwicki, owner of the Silver Heights Restaurant in Winnipeg, told SecondStreet.org the policy change allowed his business to earn additional funds to help pay its bills and employ people during a difficult period. As a whole, the COVID restrictions were very costly but this new change at least helped a bit.

In response to our Freedom of Information request, all provinces except Quebec provided data on complaints and violations arising from the new policy. Across Canada there were just 106 complaints during the first year after the policy was changed and even fewer involving actual violations. Either way, the problems seem minuscule considering how many thousands of restaurants benefitted from selling alcohol with their takeout and delivery orders and the untold numbers of Canadian consumers who took advantage of this option.

One of the most common complaints involved restaurants selling mixed drinks with takeout and delivery orders, which was against the rules in most provinces. Most often this issue was addressed by having bureaucrats go over the new rules with businesses that had broken them.

Not every province provided a breakdown of the complaints they received but in the six provinces that did there was only one complaint related to minors obtaining alcohol and not a single complaint about overconsumption.

For decades, strict restrictions on how alcohol could be sold had inconvenienced consumers and held back businesses for no good reason. There’s a key lesson in this for governments: challenge your assumptions about “all the problems” that would arise from relaxing or eliminating your rules. Striking permanent committees to constantly review business and citizen complaints about red tape would be a step in the right direction.

According to the Canadian Federation of Independent Business, unnecessary government red tape costs businesses $11 billion every year. These costs inevitably are passed on to consumers so we’re all affected one way or another.

In Alberta, a restaurant cannot accept a free 13-cubic foot fridge from a supplier. A 12-cubic foot fridge is acceptable but a larger fridge would somehow upset the universe. Other provinces have similar barriers to restaurants accepting promotional items from suppliers. Why? Canada has many pressing problems, including health care and housing crises. And governments are paying staff to monitor the free products beer companies give to mom-and-pop restaurants? The sooner governments slash away at all the red tape, the sooner we all benefit.

Colin Craig is president of SecondStreet.org, a Canadian think tank.

This column was published by the Financial Post on September 21, 2022.